I’m thrilled to announce that my 950-word flash science fiction story, “Our Kingdom Come,” has been published in Daily Science Fiction WHEREIN a tech billionaire achieves his dream of dying on Mars and second generation robots break from their immigrant parents’ dreams for the future.

END_OF_DOCUMENT_TOKEN_TO_BE_REPLACED

SPOILERS for the 2021 Marvel movie Eternals…

Now that I’ve noted what Eternals is not, it’s worth spending some time on what it is. Eternals is a story about the gods of the Marvel Cinematic Universe. And about the gods of those gods. And I can’t help but see it as a parable about organizations with layers of management, and how quickly those layers can become disconnected and unaligned. Maybe I’ve just been a middle manager who has gone through one too many reorgs or acquisitions, but hear me out.

In the Marvel Cinematic Universe, the godlike Celestials charge the somewhat-godlike Eternals with protecting the nascent humans of Earth from an extraterrestrial predator species, the Deviants. The Eternals are not to interfere in any other conflict. But the Eternals live among the humans, and develop sympathy for them. They roll up their sleeves and work with humans, romance them, and build families with them. They chafe against the injunction against protecting humanity against its worst instincts, and are sometimes horrified by what their non-interference AND their interference produces over the span of millennia. In either case, they become emotionally invested. That is, except the leaders among the Eternals, who commune with the Celestials. These upper rung managers know what the Celestials are doing, and know that it’s best not to get too attached.

END_OF_DOCUMENT_TOKEN_TO_BE_REPLACED

I’m thrilled to announce that my 500-word flash science fiction story, “In Roaring She Shall Rise,” won second place in the 2020 Escape Pod Flash Fiction contest! It’s a particular thrill to be published by a podcast. Hearing one’s words performed–in this case by Cast of Wonders editor Katherine Inskip–is a rare treat.

Please enjoy “In Roaring She Shall Rise” on Escape Pod.

Short fiction review-maestro Charles Payseur has some lovely things to say about this story and its Escape Pod peers in his Quick Sip Reviews.

END_OF_DOCUMENT_TOKEN_TO_BE_REPLACED

I sold my second story, and the thrill is just as strong as the first. The Cast of Wonders podcast called for Young Adult science fiction/fantasy stories that evoke a sense of wonder — in 500 words or less. And since this is a podcast, I got to hear my words read by a professional voice actor (and Hugo award-winning author), which is pretty cool.

This is a short one. I hope you enjoy “Remember the Ifrit.” (If you’re in a hurry, my story starts around the 6:00 mark on the audio.)

An image that stuck with me from childhood was from an episode of Cosmos, where Carl Sagan hypothesized what kind of life might exist in the atmosphere of a gas giant planet like Jupiter. (I’m pleased to see that the segment clip is up on YouTube.) It was only after I’d written the first draft of “Ifrit” that I realized I was stealing from Carl Sagan. Let’s call it a tribute, instead. 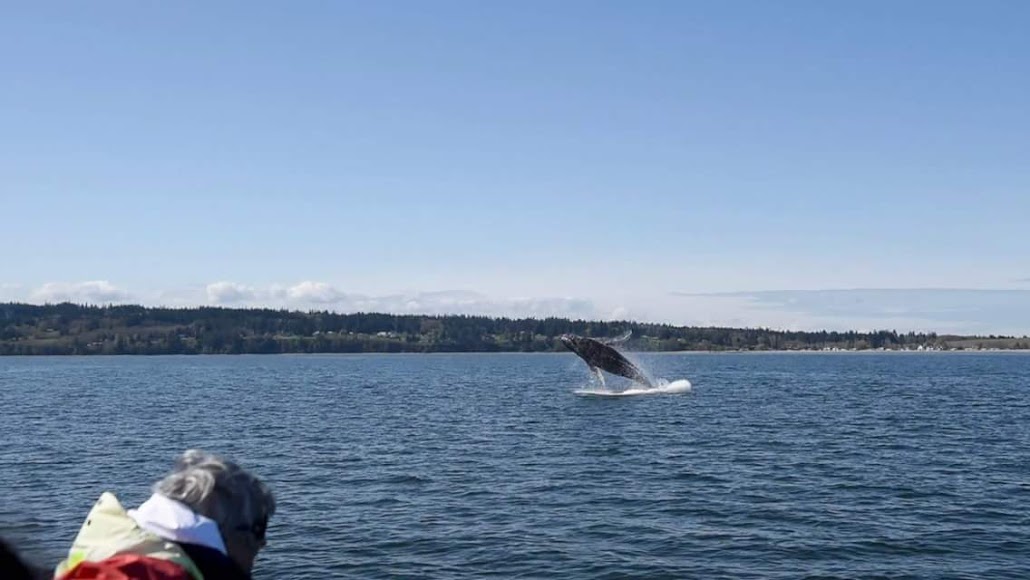 When the family went on a whale-watching cruise off Whidbey Island in Washington State, I resolved to experience it with my daughter, directly, with no camera involved. But my resolve faltered when the Humpback we’d been following began speeding just under the water’s surface. I had gotten my phone out of my pocket and started taking a video when she breached out of the water and then fell with a tremendous SPLASH. I never got her in frame — I wanted to see it with my naked eye — but in the audio, one can hear the family shouting and whooping, and mine was the loudest voice on the boat. That cruise, and sharing the experience with my daughter, was the first thing I thought of when I began considering topics of a story with a “sense of wonder.”

My cousin-in-law did manage to take a perfect picture of the whale, so I got the direct experience and a memento. I think it’s interesting that it’s not the photo that best recalls that sense of wonder for me, but the audio. The picture represents what I saw; the audio captures how I felt. For the story, I felt that both the experience and its recollection were important, along with the curious modern impulse to interpose devices between ourselves and a wonder in hopes of being able to re-experience it at will. And, of course, the power of an experience shared was the most important of all.

Now we know that Star Wars Episode VIII will be called The Last Jedi. So who is the last Jedi? Let’s not belabor it. It’s Luke. The Last Jedi is Luke Skywalker.

I’ve laid out what the prophecy of “bringing balance to the Force” means in terms of Star Wars’ ring cycle. [In Star Wars: The Force Awakens, the Answers Hide In Plain Sight] It bears repeating that in Episodes I-III, we see Anakin Skywalker turned to the Sith — the dark polar end of the Force. In Episodes IV-VI, we see him brought back to the light polar end — the return of Anakin the Jedi. Structurally, it makes sense that the final ring in the saga will be the emergence of the prophesied balance between dark and light.

Luke Skywalker figured it out. He wouldn’t have saved his father in Episode VI had he not tapped the strength of the Dark Side to physically defeat Vader, but then brought himself back under control to spare Vader, once beaten. Luke was never indoctrinated into the Jedi’s pitiless stance against forsaking duty to rescue loved ones. Guided by his compassion instead of Jedi dogma, he was able to do what Obi-Wan and Yoda could not.

By Episode VII, Luke has suffered a disastrous failure trying to be a Jedi Master, and his students are dead by the hand of his Dark-seduced nephew. So he fled to an ancient and lost Jedi Temple, to learn something that neither Obi-Wan nor Yoda had taught him. It’s not a stretch to guess that, spurred by his experience with Darth Vader, he was in search of the true nature of the Force, one that neither Jedi nor Sith had mastered. He has learned about the Balance.

Now Rey has come to him, a Force-strong young woman in need of training. Luke won’t repeat the mistakes of the past. He will remain the last Jedi. The purple light that bathed Rey’s and Kylo Ren’s faces as their blue and red lightsabers clashed was no accident. When Luke trains Rey in the Balanced Force, she will become something new, requiring a new name. And after the Revenge of the Sith and the Return of the Jedi, I’m confident that the new name will figure into the title of Episode IX.

The non-English movie posters have revealed that “Jedi” in the title is  being used as the plural. So it’s not just Luke. But no matter how many there are, the fact that they’re the last is what’s significant. The reasoning stands. After this set, Force practitioners will be something else.

Oddly, the French translation of Return of the Jedi was Le Retour Du Jedi — singular. Which rather minimizes the impact of Luke’s journey.

I take the last line from the teaser trailer for The Last Jedi as confirmation of all the above.

Why do they fight? What’s the real reason, beyond the circumstances of the moment, or the doctrines used to sell violence to those who would otherwise have peace? When the news and social feeds are filled with stories of escalating conflict, this is the only question that matters over the long term. The reasons have to be addressed.

When I try to understand the real reasons, I find myself getting lost in the current talking point meta-war between Israel and Palestine. So I turn to the buffer and distance offered by science fiction. Science fiction can provide a metaphor to understand conflict, and the “confrontation with the Inhuman Other” has been fertile soil for the genre. And in the unexpectedly satisfying Dawn of the Planet of the Apes, science fiction transcends metaphor to build a myth, an illustration of a truth both timeless and bleak.

Though a sequel of a remake, the movie is a standalone piece, leading with an efficient bit of narration to establish that civilization has crumbled, there is a history of mutual blame between human and intelligent ape, and the two races have no reason or desire to interact. This is the story of what happens when they do. This is a “clash of civilizations” myth about why there is no two-state solution on the Planet of the Apes.

There are no straw men either. Both humans and apes have leaders with an interest in peace and an understanding of politics. The hawkish factions of both tribes have legitimate reasons not to trust. As viewers, we believe in the legitimacy of both civilizations’ right to exist. The movie’s plot is a catalog of earnest attempts at bridge-building and how they fail, with theoretically rational decisions paving the road to disaster:

The answers hinge on basic presumptions about your own people, and theirs. Actions taken out of hope can sometimes create connections, but actions motivated by fear always end up justifying that fear. And as a rallying cry, fear is far more effective. When the survival of one’s people is the perceived stake, the risk of trust becomes too high for a rational leader to embrace. War becomes inevitable, a fact realized even by those who worked for peace.

Why do they fight? Because they can neither trust nor forgive. Because they fear, and nothing short of domination of the other tribe can erase that fear. On their planet and ours.